Fiona says about her work:

“…I interpreted the found portraits and their vintage aesthetic as links to past lives, including to experiences of war and the period of optimism and creativity that followed. Using Photoshop technique, I added and altered, to juxtapose time in surreal, seamless montage. I drew on other Jungian archetypes as well as the shadow, such as: ‘the apocalypse’, ‘heroine’, ‘trickster’, ‘mother’, ‘maiden’, ‘persona’. Jung suggested that archetypes are inherited potentials: universal patterns, or models of people, behaviour, personality, held within the psyche.
Envisioning the ambiguous presence of the shadow side, opens up perceptions of its existence not just within individuals, but on an exponential scale within contemporary cultural phenomena. Social media, News, Big Data, surveillance, democracy, globalisation, consumerism, are dynamic, mass channels where the collective unconscious is both active and susceptible…”

The exhibition will continue throughout the rest of May 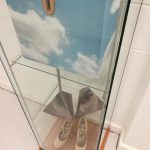 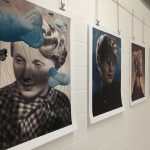 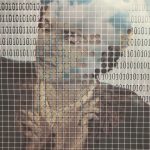 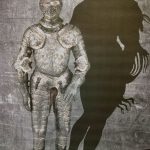